"The cathedral is a beautiful attraction and worth an hour or two (if you dont have young children!). The grounds are fenced off from the traffic. Notre Dame is right over the road from the Post Office, which is another must see and both are a 5 minute walk to the Opera House. The French colonial architecture seamlessly blends in with the bustle of the Saigon traffic- so many motor bikes and so little time!" 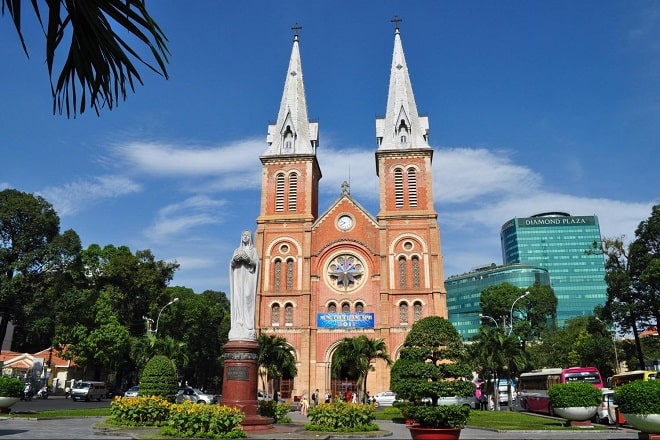 , - officially Cathedral Basilica of Our Lady of The Immaculate Conception is a cathedral located in the downtown of Ho Chi Minh City. It was established by French colonists who initially named it Cathédrale Notre-Dame de Saďgon, the cathedral was constructed between 1863 and 1880. It has two bell towers, reaching a height of 58 meters (190 feet). In 1895, two bell towers were added to the cathedral, each 57.6 m high with six bronze bells with the total weight of 28.85 metric tonnes. The crosses were installed on the top of each tower of 3.5 m high, 2 m wide, 600 kg in weight. The total height of the cathedral to the top of the Cross is 60.5 m.

Following the French conquest of Cochinchina and Saigon, the Roman Catholic Church established a community and religious services for French colonialists. The first church was built on today's Ngo Duc Ke Street. There had been a Vietnamese pagoda, which had been abandoned during the war. Bishop Lefevre decided to make this pagoda a church. 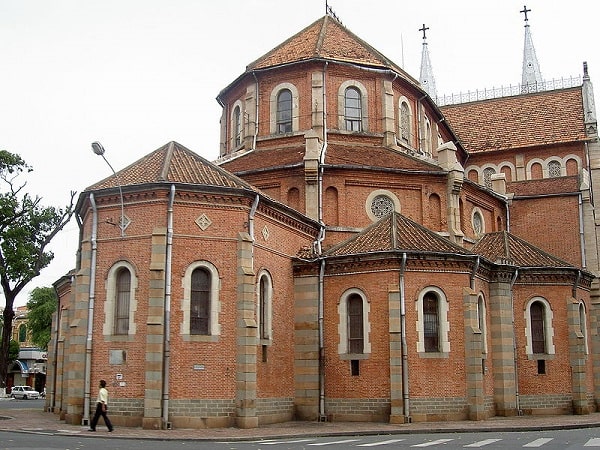 The other side of the cathedral

The last church was too small. Thus, in 1863, Admiral Bonard decided to build a wooden church on the bank of Charner canal (Kinh Lon). Lefevre put the first stone for construction of the church on 28 March 1863. The construction was completed two years later and was called "Saigon Church". When the wooden church was damaged by termites, all church services were held in the guest-chamber of the French Governor's Palace. This palace would later be turned into a seminary until the Notre-Dame Cathedral was completed.

During October 2005, the statue was reported to have shed tears, attracting thousands of people and forcing authorities to stop traffic around the Cathedral. However, the top clergy of the Catholic Church in Vietnam couldn't confirm that the Virgin Mary statue in front of a cathedral had shed tears, which nevertheless failed to disperse the crowd flocking to the statue days after the incident. The reported 'tear' flowed down the right cheek of the face of the statue.
In the flower garden in front of the cathedral, there was a bronze statue of Pigneau de Behaine (also called Bishop of Adran) leading Prince Canh, the son of Emperor Gia Long by his right hand. The statue was made in France. In 1945, the statue was removed, but the foundation remains. 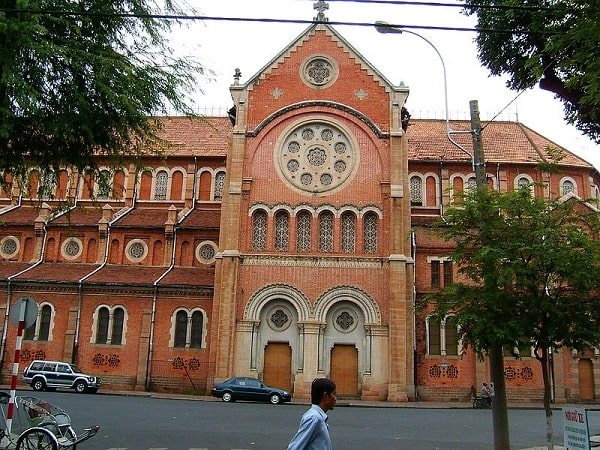 Another look at the cathedral

"Wonderful colonial cathedral is a slightly-idiosyncratic remnant of French Indochine - actually Marseilles in the Far East as that is where it's brick facade came from.
And when you have done exploring it's recesses go across the street for a nice cold Saigon beer and beef noodles in the Post Office restaurant."