"Coming to Son Tra Peninsula, visitors will be overwhelmed by paradise-like scenery, pristine beaches, and clear blue water, old jungle teemed with many rare animals, the colorful coral reef and captivating coastline ... is the gift that nature has generously bestowed to the Son Tra peninsula - " precious celestial gem" of Da Nang. Son Tra Peninsula is located in the fresh cool climate area, with its beautiful natural scenery and rich vegetation.
There are many beautiful beaches at the Coast of Son Tra Peninsula; including some famous beaches such as North Beach (northern peninsula), South Beach and the Buddha Beach (southern peninsula). Besides, coming to Son Tra, visitors will admire the tree thousands years old banyan trees" 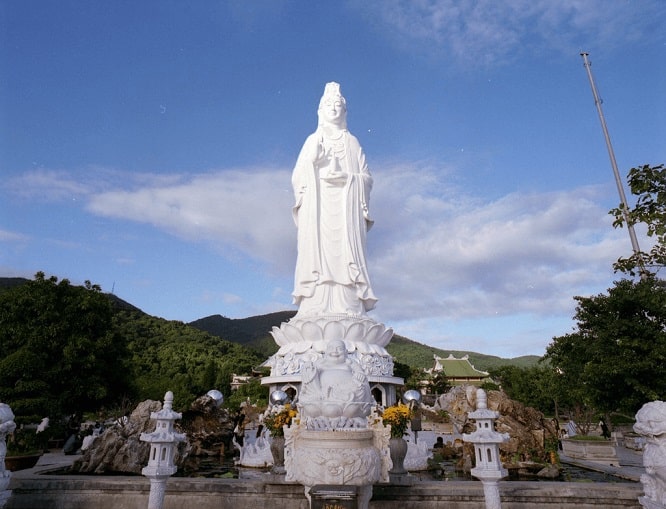 Linh Ung Pagoda Built on an area of 12 hectares on the Son Tra Peninsula. The Lin Ung Pagoda in Da Nang is the largest in size and artistic architecture. The pagoda is famous for its magnificent 67-meter high statue of the Goddess of Mercy (Goddess of Mercy), which stands on a lotus-shaped platform.
A large yard with lots of statues leads visitors to a huge gate with three doors. From here, visitors can enjoy everything. You look over the boundless sea down and you see many boats bobbing on the water and the Marble Mountains in the distance. The residents of the city believe that the statue of the Goddess of Mercy will protect fishermen from possible storms and high waves.
Inside the statue, which corresponds to a 30-storey building, there are 17 floors, where visitors can look out over the surrounding area. Each floor houses 21 statues of Buddha with different appearances, expressions and gestures.

The Conga cathedral is among the local population known as the "roosters church." This name was derived from its weathercock on top of the tower. The candy-pink Danang cathedral was built before the French inhabitants of the city in 1923. The cathedral has a Gothic style and is 70 meters high. Today the Catholic community consists of at least 4,000 faithful. If you come late for the service, then you have a chance, there is only one more pitch. Behind the church is a cave of the Virgin Mary, which is a replica of the Lourdes Cave in France. 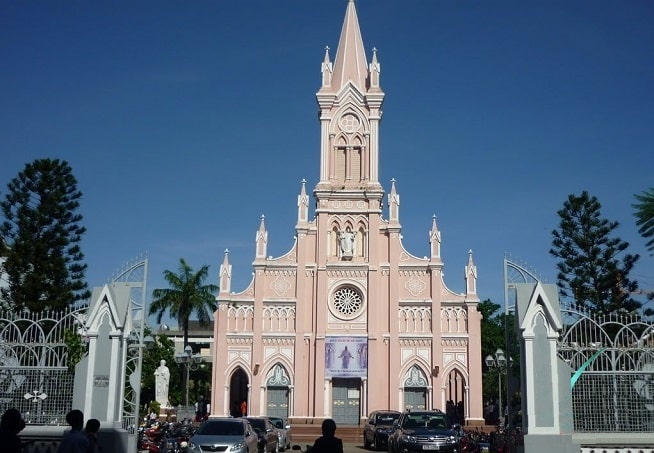 De Cao Dai temple is the largest temple in central Vietnam has about 50,000 followers. A sign with the text "of giao nhat ly" (all religions have the same reason) hangs above the main altar. Behind the gilded letters shows the founders of the five major world religions: Mohammed, Laotse, Jesus, a Southeast Asian-looking Buddha and Confucius. Behind the main altar is a huge globe with the Cao Dai ("divine eye") as a symbol.

Monkey Mountain, is situated on the Son Tra peninsula and arises like a mushroom. This name was given by the Americans during the war. This sumptuous National Park is the area of the rare red-face monkey and the mountain is 693 meters above sea level. The winding road around the mountain makes for nice motorcycle ride and you will experience the beautiful view of the city. The view from the top is huge and it is not surprising that Monkey Mountain was used by the US Army as a communications and observation base. 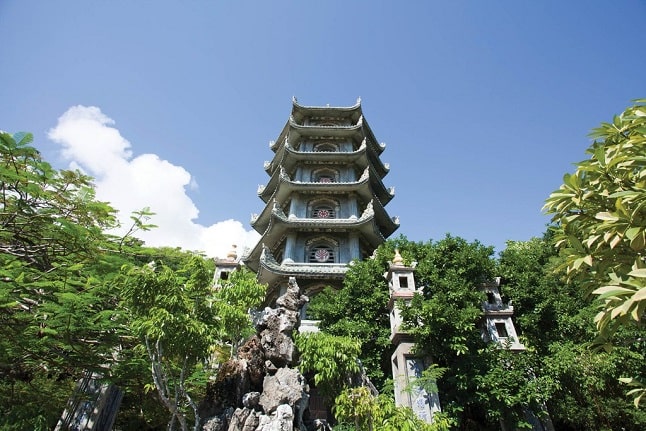 Another nice pagoda is the Linh Ung Pagoda It's located in one of the five Marble Mountains, on the eastern side of the Thuy Son (Water). To the right of the pagoda is the Vong Hai Dai (a pavilion with views over the sea), which provides a clear picture on the Non Nuoc Beach. On the left is the cave of Ngu Coc. Another cave (Tang Chon) is located behind the Linh Ung Pagoda.
It is an old pagoda with great historical value. The pagoda was built and named Ung Chan and only in 1841 was named Linh Ung Pagoda. The pagoda is considered part of the beautiful landscape of Da Nang and is frequently renovated.
Inside the main shrine there are representations of the three Buddhas: A Di Da, the past of the Buddha; Thich Ca Mau Ni (Siddhartha Gautama) Buddha of the Present; and Di Lac, the Buddha of the future.
There are also statues of other gods: Visva Hadhra Bodhisattva Manjushri Bodhisattva, Avalokitecvara Bodhisattva (or Goddess of Mercy), Ksitigartha Bodhisattva, and the eighteen arhats. Arhats are enlightened friends of Buddha. It's not that visitors are not happy and cheerful at the sight of these illuminated.
In the pagoda are two precious gold plates, one recognizing the pagoda reflects a national pagoda. The other tells the name of the pagoda. The Linh Ung Pagoda at the Marble Mountains has been designated as a national historical and cultural monument.