"If you think that because you have seen the Forbidden City in Beijing then Hue can be discounted- please think again. The court rituals and daily life do bear resemblances but if you take the time to look further you will not be disappointed. The buildings may not be in such good condition as those in Beijing, but nonetheless there is no mistaking the purpose for which they were built. The life for courtiers and military personages of high rank will have been arduous and certainly not for the faint hearted!". 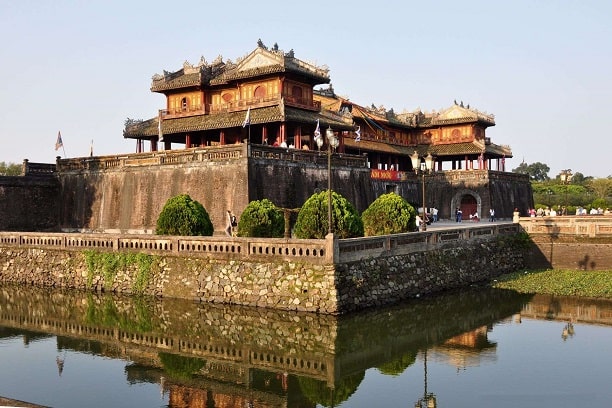 The Imperial City of Hué - was once an enormous complex full of all the executive and bureaucracy you would expect from a country’s capital. It was enclosed within a square fortress, with each of the four walls about 2 kilometres long and a wide moat on the outside. The site was chosen by experts in ‘geomancy’ a spiritual science that looks for good omens in the natural landscapes. It was decided that the river and the mountains here would protect the city, because they looked like snakes and lions. All through this huge city were temples, palaces, offices, gardens, and residences. The most important bit was in the middle. It was called the Purple Forbidden City and it was where the emperor and his closest confidants lived and worked. Once, it would have been inaccessible to most people. Now, of course, we can all walk through it and see what remains. 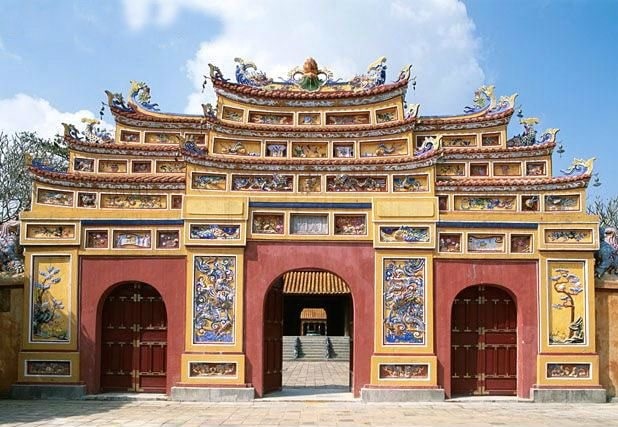 The Imperial City is located in the centre of the Citadel, where the highest offices of Vietnam's feudalism were established and the sanctums honouring the cult of decreased Emperors.
The Citadel, also has a nearly square form, with more than 600m long for each side, built of brick 4m high, 1m thick, around which is ditched a system of protection trench. Access to the Imperial City can be made by four entrance gates. Noon Gate is only used for the King. Royal Palace consists of more 100 beautiful constructional works divided many sectors.

The forbidden citadel is located inside the Imperial City, behind the Throne Palace. This is the Forbidden Purple City and it was reserved for Emperor and his family. It was constructed early in Emperor Gia Long'reign in 1804 with brick walls 3.72m high, 0,72 m thick, about 1,230 m in circumference. Its front and back sides are 324 m each while either left and right side is more than 290 m including 50 architectural constructions of different sizes and 7 gates for facilities of entrance and exit.

Although natural disasters and the hand of time played their part, it was really the Vietnam War that caused most of the damage. The North Vietnamese Army attacked Hue in January of 1968 and the Allied forces responded with bombings. Of the 160 significant buildings within the site, only 10 major ones survived the battle.

Ancient Hue includes the Perfume River and the Ngu Mountain, palaces and citadels, tombs and temples with hundred of historic years. They are being embellished and recovered by material contribution of Vietnamese and International community in order to keep Hue City as cultural heritage of World.

"Because Vietnam and China shared similar philosophical and religious beliefs for many centuries, and also because Vietnam was heavily influenced architecturally and linguistically by China, the Purple City shared a common role as the Forbidden City in China, This was the most restricted area within the Citadel, reserved primarily for the Nyugen emperor and his family. Many of the most impressive buildings - those of the Emperor's residence, no longer stand, a consequence of wars in the last century. However, those parts that do stand, are being restored. The size of the Purple City is approximately half an kilometre by half a kilometre square, and involves a fair amount of walking. Many parts are also exposed with little shelter, so keep an eye out for the weather"