"The story behind the One Pillar Pagoda is obscure now but related to an aging emperor who was unable to conceive a child and came here to pray for a son and dreamed he had a baby boy. Months later, a son was born to his wife and he built the pagoda to resemble a lotus flower on a stem. Fascinating with many people climbing the steps to pray. The pagoda has been destroyed and rebuilt several times". 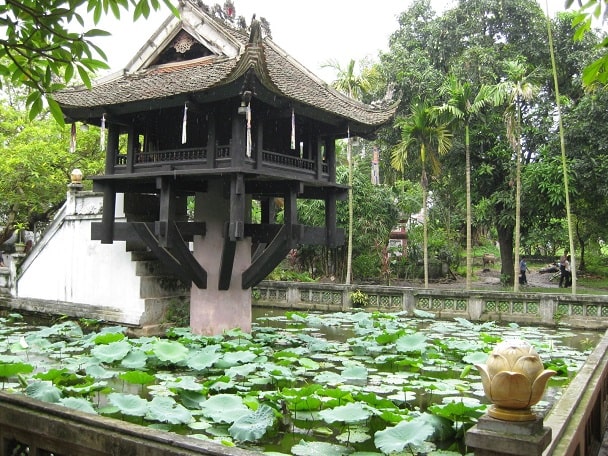 The One Pillar Pagoda - is a historic Buddhist temple. It is small and is not so far from the Mausoleum. This allows you to visit the Pagoda after or before the Mausoleum. The Pagoda is regarded, just like the Perfume Pagoda, as one of Vietnam's most evocative temples.
The temple was built by Emperor Ly Thai Tong, who ruled from 1028 to 1054. Although the emperor wanted to have children, he was childless. One night he had a dream. In his dream he saw Avalokiteshvara (Goddess of Mercy) sitting in a pond on a lotus. In this dream she handed him a son. When he woke up, he married a peasant girl. Months later the Queen gave birth to a male child. 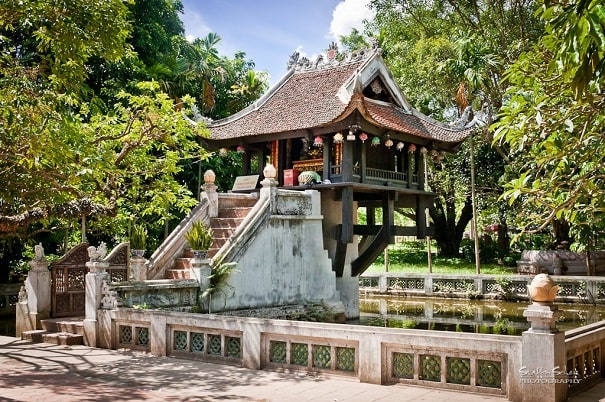 The temple was renovated in 1105 by Emperor Ly Nhan Tong and a bell was cast and an installation was attempted in 1109. However, the bell, which was regarded as one of the four major capital works of Vietnam at the time, was much too large and heavy, and could not be installed. Since it could not be tolled while left on the ground, it was moved into the countryside and deposited in farmland adjacent to Nhat Tru Temple. This land was widely inhabited by turtles, so the bell came to be known as Quy Dienn Chung, which means "Bell of the Turtle Farmland".

At the start of the 15th century, Vietnam was invaded and occupied by the Ming Dynasty. In 1426, the future Emperor Lę Lợi attacked and dispersed the Chinese forces, and while the Ming were in retreat and low on weapons, their commanding general ordered that the bell be smelted, so that the copper could be used for manufacturing weaponry.

The temple is built of wood on a concrete pillar with a diameter of 1.25 meters. The pagoda is designed as a lotus flower, Buddhist symbol of purity. The Pagoda stands in a muddy pond. In 1954, the pagoda was destroyed by French colonists, but after that it was rebuilt again. 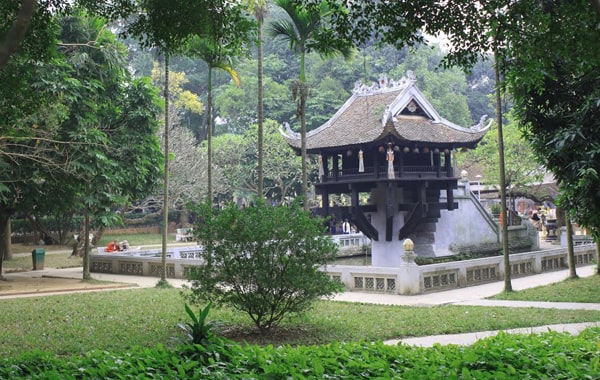 "We saw this pagoda as part of our walking tour of the Ho Chi Minh Palace Gardens. We had a little wait to get to see the vibrant Buddha shrine, but it was well worth the time. It sits on a single pillar that is anchored in a small pond.
There is s small staircase to walk-up to the pagoda, not good if you can't handle stairs. Glad our guide pointed it out to us because we had a good photo opportunity at the top of the staircase."