"This was one of our first adventures when arriving in Hanoi . Although it was a long ride from our hotel (private tour recommended) it was a great experience you start off with a 40 minute boat ride down the yen river with beautiful views when you get to the end you have a choice you can walk up the stairs of take a cable car for around $3-$4. We took the walked up and took the cable car down which I would recommend doing for either the up or down trip because the cable car has nice views along the way.
On the walk up you pass a bunch of little shops of people trying to sell stuff. Most where not open at the time of year we went. When you get to the top you walk down the stairs to get to the pagoda. When you get there it is built into the side of a cave and there was no one there when we first got there which made it even better. But what I really liked was it was not very commercialized as some other caves we visited during our trip. I would definitely check this out if it is your first time here. Along the root to the pagoda there were a few other pagodas to see along the way". 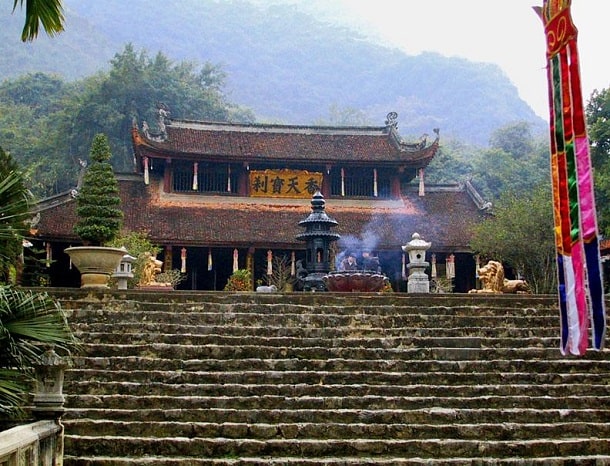 The Perfume pagoda - is located approximately 60 kilometers southwest of Hanoi in a national park. The pagoda is located in the center of a highly respected and sacred place with a maze of mostly Buddhist temples built in the limestone caves of Huong Tich. In this splendid day trip is often thought that the emphasis is on a visit to a pagoda. The opposite is true. In the spring, thousands Mahayana Buddhists make a pilgrimage to this area, in which they visit dozens of pagodas and temples. The main pagoda is known as "Chua Trong" and is located in the Huong Tich Cave. This pagoda is the place where a religious festival attracts large numbers of pilgrims from all over Vietnam. This is biggest festival in Vietnam, which begins on 15 February and ends in late March. 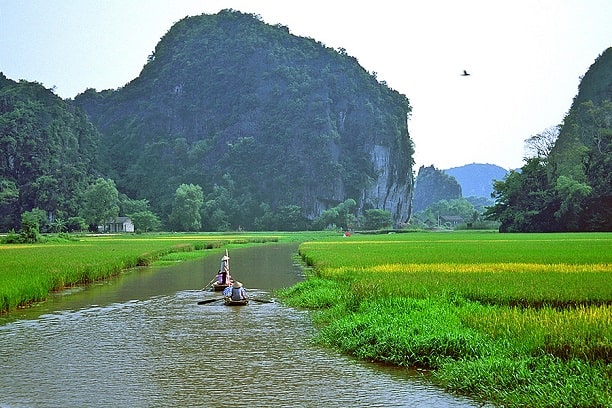 On our way with the boats

The central part of the religious complex is the Huong Tich cave, where the main pagoda is, the Perfume Temple (which is also called Chua Trong, Inner Temple). The entrance to the cave resembles the mouth of a dragon with Chinese characteristics. A dragon means "power" in Asian cultures.

There is at the entrance also an inscription "Nam Thien De Nhat Dong", meaning "the main cave under the southern sky" and dates from 1770. The words are attributed to one of the rulers of the time Thinh Do Vuong Trinh Sam.

Inside the cave or temple are numerous statues. There is a huge statue of Buddha and Quan Am, both made of a green stone.
The Quan Am left leg is stretched and the bottom is a lotus, her right leg is bent and is supported by a lotus flower with leaves; a hand ia holding a pearl.
There are also images of Arhats (holy men) and various figures. In the cave are many stalactites and stalagmites, some of which have become slippery over the years, as the visitors there have been to.
Other temples in the Chua Huong complex Thien Son Pagoda, Thuyet Kinh Grotto, Phat Tich Temple and Vong Temple. 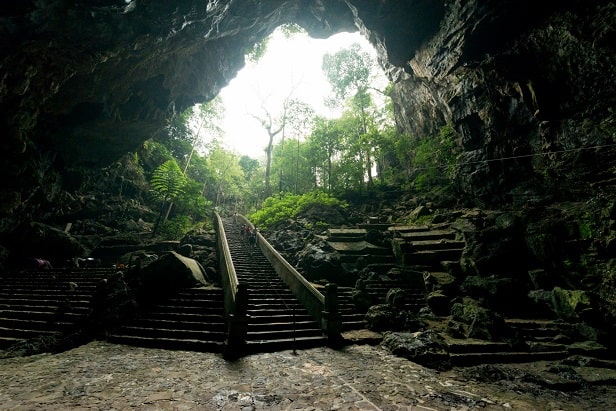 Inside the Perfume Pagoda

"The bus ride is long from Hanoi but the boat ride on the river is very pleasant. We had been told that the walk up to the pagoda was difficult so we paid the extra for the cable car. Don't let them kid you; the walk up to the cable car and the walk down to the cave are probably the worst parts. There are tons of stairs to climb and they are uneven and became quite slippery when it was raining. I don't think the pagoda is worth the trouble but the boat ride there was very peaceful. We were warned by our tour guide to not tip the boat rowers until you got on shore because if they don't think that you tipped enough, they will not bring you back to shore! We were told that 20,000VND per person was an appropriate tip. We gave 50,000 as a couple and she still wanted more. Also, the ride down the river is very peaceful and it would have been a lot more peaceful if the rowers were not talking to each other across the boats for alot of the trip. Their chatter tended to ruin the peacefulness"