"I visited it this place occasionally and was impressed by its very ancient atmosphere. There are only 3 towers: main and 2 small but enough to feel their age and history (they were built more than 1000 years ago).
Around them there is a cultural dancing and music show every hour. And lots of craftsmen showing you their skills. The only cons are crowds and lack of shadow. Enough one hour to explore everything around. Bring more water with you because it is really hot there." 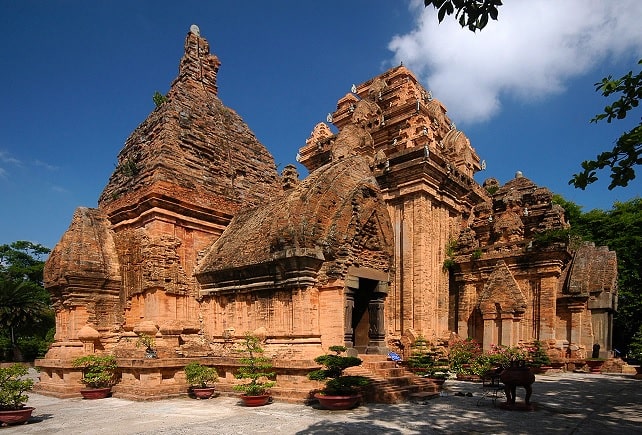 Po Nagar Cham Towers - located 2 km north from the center of Nha Trang, on the banks of the River Cai. There are four Cham Towers and they are still actively used for worship by Cham, Chinese and Vietnamese Buddhists. Originally, the complex seven or eight towers, but only four towers were left. Upon these is the 28 meter high northern tower (Thap Chinh), dating back to the year 817. This building still has a religious significance for the people, you have shoes pull out before you go inside.

One suspects that this place though was first place they used use worship in the 2nd century AD. The original wooden structure was razed to the ground by an attack of the Javanese in 774, but everything was replaced by a stone-and-brick temple (the first of its kind) in 784. 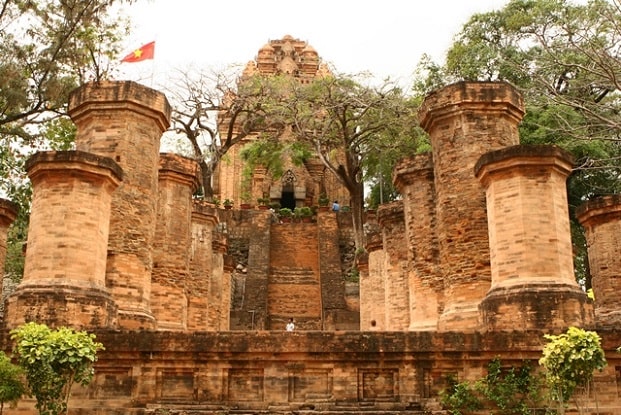 The pillars, before going up a steep staircase

In 918 King placed Indravarman III (carved phallus with a human face on it) a gold mukha-linga in the North Tower, but it was stolen by Khmer robbers. Multiple images were then replaced, but..... destroyed or stolen. This lasted until 965, when King Jaya IV Indravarman replaced the gold mukha-linga by a stone figure, Uma (Shakti or female consort of Shiva), which is still present.
Above the entrance of the North Tower you can see two musicians. One of them has his feet on the head of the bull Nandin. He is flanked by a dancing, four-armed Shiva. The sandstone doorposts are covered with inscriptions, as well as parts of the walls. A gong and a drum were placed under the pyramid-shaped ceiling in the front room. In the 28m high pyramid-shaped chamber is a black stone statue of the goddess Uma with 10 arms, of which two are hidden under her jacket. She sits and leans against a monstrous beast.
The Central Tower (Thap Nam) was partially built with old bricks in the 12th century. At this place was originally a building that dates back to the 7th century. It was built less delicate than the other towers and has little embellishments. The pyramidal roof is missing and som epillars, although the interior once had altars, that were covered with silver. There is a linga in the main room. 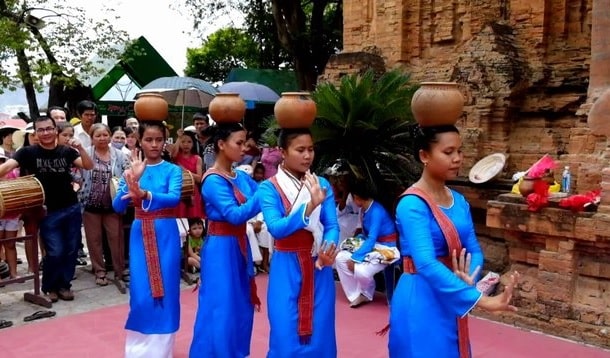 A worship in the Po Nagar Cham Towers

The south tower (Mieu Dong Nam) was once dedicated to Sand Haka (Shiva). It still houses a linga, while the richly decorated Northwest Tower (Thap Tay Bac) was originally dedicated to Ganesh. At the rear of the complex is a less impressive museum with a few examples of Cham masonry.

"This is certainly worth 45 minutes of your day. 1200 year old temples in a gorgeous hilly setting of trees. Magnificent. 5 to 10 minutes from the main area of Nha Trang. There are stairs to climb though not too many.
There are many other tourists and a few pushy "get on get off bus types" that just have to spoil your photo to get their photo. It's a very pleasant setting away from the beach. Mind your clothing as it is a temple."